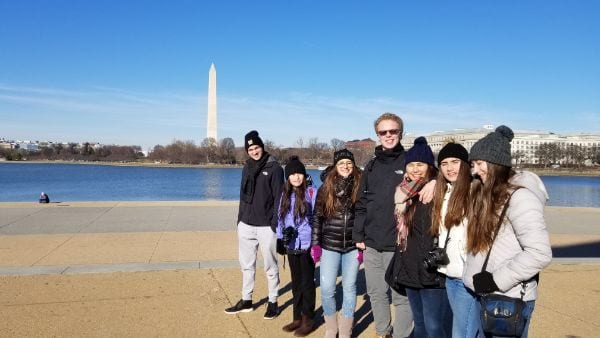 The flights were only on sale for two days, and we had to act fast if we wanted to snag them. For only $39 each way, we could fly in and out of Reagan Airport in DC.

I called in the two exchange students in my house; were they interested? Definitely.

About a month later, as I walked out, I strongly considered picking up an extra coat for my two girls, or checking in with the other parent, to make sure that they brought enough winter clothing. But I opted not to, thinking they were old enough to pack their own suitcases.

A little before 3 PM on Friday, I picked them all up from school. With seven in the car, we headed to the airport. By about 10:30, we had successfully flown south, met up with the college son in the airport, and navigated the metro.

As we prepared to walk the six blocks to the hotel, in sub-zero wind chills, I looked at the girls. “Coats?”

“I didn’t bring one,” said my youngest. “I have this sweatshirt.” My jaw dropped. “But it’s on top of this sweatshirt, and this one is really warm,” she pressed on.

I looked at the next–in her hooded down vest. “You brought a real coat, right?” She shook her head no.

I looked at my other American two teenagers. “I forgot my gloves–but I’ll be OK,” said one quickly.

I knew the Brazilian, my weather afficionado, had plenty of outside wear in his suitcase. He had already told me that it was going to rain, and rain hard, all day on Sunday. “I’ve got water repellant coat and pants,” he said proudly.

I looked at his feet. “Boots?” He shook his head no. “So you’ve brought pants and a coat, but nothing for your feet, the things that are in the cold water?” I asked. Again he shook his head no, and asserted that he would be fine.

I muttered to myself about teenagers. “Where is your hat?” I asked my son, completely exasperated. This was the university student, surely he could pack for himself?

Our visit was officially started.

The next morning, the temperatures could only be described as “bright and clear”. Charitably, one might have called them “brisk”. Realistically? I called them “downright cold.” I started by doling out clothing from my own suitcase: an extra down vest, gloves, hat, scarf. (The Brazilian looked longingly at gloves on the street but insisted that he was fine. The American doled over the money and slipped into warmth with a happy sigh.)

While my own three kids had all been to DC before, none of the other five had any expectations beyond “get to see things in DC”. For teenagers, they had remarkably few opinions. All decisions were left to me. Their only request? “Let’s not spend much money.”

Fortunately, our tax dollars have made a trip to DC relatively affordable. We headed to the museums and monuments, planning our time around the weather. We walked over 11 miles the first day, according to the watch count anyway. Every building, every set of stairs, every water feature (frozen or not) was a photo stop.

No, if you are a teenager, you take a selfie. At every one.

And then a photo with your bestie. And then one with all your group. Maybe another with a goofy pose. Then probably one with a pose of your hands making a heart. Maybe another using action this time.

One thousand photos and 200 posts to social media later–and three days–we were back to the airport.

“I love DC,” they said as they waited for the plane.

Subscribe
← Previous: What Visa Works for Dairy in the USA? Next: Driving to a Playoff Win →