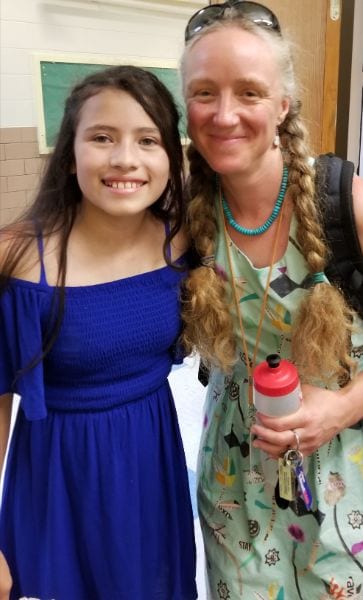 “You’re taking me out of school at 12.40?” my daughter asked. “But we are supposed to be practicing for graduation then. Are you sure that I can leave?”

I groaned. No one had told me about graduation practice. She had begged to get her “hair done”, and the only appointment available on Tuesday was at 1 PM. “I’ll talk to the office,” I promised.

The secretaries at the front desk confirmed that she was right: graduation practice was, indeed, right at the same time. “But take her to get her hair done,” these two wise mothers-of-girls encouraged me. “It’s important.”

The schedule was suddenly tighter than I had thought it would be, as I decided we should both get hair cuts… and there should probably be food in the refrigerator for my mother, sister and niece when they arrived. They had come all the way from Illinois to join in the madness of this week, and were splitting their time between the two east coast sisters. Our daughter’s graduation was to be first on Tuesday, while Friday boasted a double-header. Our youngest niece would graduate preschool at noon, and then our son would follow with high school graduation in the evening. (I feel it is only fair to note that one other niece, who couldn’t make the trip, had just graduated junior college two weeks earlier, too. It was a good year to be a grandma!)

As we got everyone dressed and ready, the graduate wondered aloud if her brothers were going to be at the graduation? Of course, we answered. “And will they be dressed up nicely?” she asked.

Apparently she had realized what we parents had kind of overlooked: the two brothers were at their final lacrosse supper of the season–a special swimming party that started immediately after school. Although I’m sure that the elementary school graduation time was discussed that morning in the normal get-out-to-school rush—complicated by finals–they claim that they were never told what time to be at the elementary school. Thank goodness for texts, which pulled them out of the pool and into shorts and a t-shirt, just in time to walk in as the ceremony started.

Sitting in the gymnasium for this final graduation, my husband and I realize that we had been here for 13 years. Our oldest graduated the year our youngest started. We could not count how many parent conferences we’d attended, or band concerts we’d sat through. We no longer knew how many times we’d been to welcome back open houses in September, or art walks in May, or family fun nights in June. This has been kind of a second home to our family for so long it seems second nature to be going in and out of this school.

But the biggest transformation is the young lady dressed, stunningly, in blue. She first came to this school right after she arrived to our family. Within a week of coming into the USA, she attended her first All School Sing. Then, she snuggled into my lap and held on tightly, even as she bounced along with the beat.

I recalled how she helped with the book fair when she was only a toddler–and how she proudly ran the cash register all by herself, even during the busiest times, at that same event just two weeks ago. I thought about her she walked down the halls to watch the chick hatching with her older brother, and then her second brother, and finally her own group of eggs when she reached third grade.

I remember taking her into kindergarten, her enthusiasm to finally be in “school” with both her brothers at the same place. She was a bit hesitant when her second brother left for the middle school two years later. But in the four years since, she has made it her school, her own place.

Tonight she stands in front of her principal, hearing her name called as she comes forward to receive her diploma. She reaches for it, long hair flowing in pretty curls, and her blue, freshly manicured nails grasping the paper securely.

She takes that step forward, again pushing forward into her next phase of life. It’s a path her brothers have both trod, but she makes it uniquely hers.