The Lure of a Snow Day 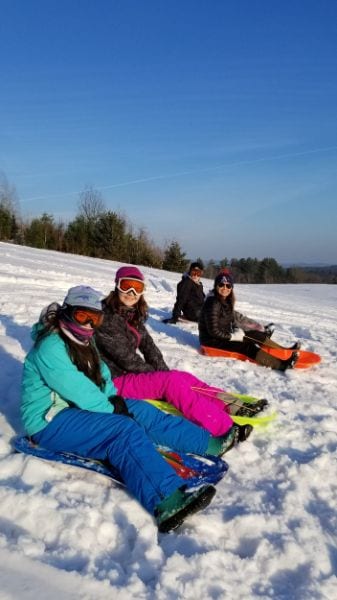 This is the question posed by every child in our house, along with all their friends and all students everywhere.

Will the day’s plans suddenly allow for that expansion of time, the gift of staying home and the release from their responsibilities?

There are no snow days in Barcelona, Spain, nor in Manuas, Brazil, where our two exchange students hail from. The idea of getting a day of vacation because of weather holds great appeal to the two of them–perhaps even more than their two American siblings.

When I tell them to prepare, that the first snow day is likely to occur tomorrow, they are full of questions.

“How do we know if it is cancelled, Jill?” one asks. I explain the procedure, how the robo calls probably won’t come in until early in the morning.

Thinking fast, they say, “But then we have to get up and find out that it is cancelled?” They don’t like this, none of the four of them do. “How about if we set no alarms and you just wake us up if we have to go, if school is really not cancelled? You’re up anyway, right?”

Indeed, I realize, that’s a true statement: the adults are up anyway. There are no “snow days” when you work as an adult–and especially not when your office is in your home and you have no need to drive on good roads.

I agree to waking them up if they have school. When they do not have to be up, they happily slumber through until at least 10 in the morning–and my morning is rather productive with no worries about them.

The snow piles up outside, just as the weather predictions had said. I introduce the two exchange students to the joys of watching and photographing the birds in the crab apple tree right outside the living room window. They make hot cocoa. They watch Netflix. They lounge in pajamas.

Eventually, the prettiness of the snow beckons. One decides to go outside to “play” and soon another follows. Then someone else is putting on snow pants and jacket, another is searching for the right pair of gloves. And then, finally we are all outside in the snow, myself included.

We grab sleds and start down the driveway. The dogs run alongside, barking and yipping in delight. We crash, we laugh, we start again. We careen out of control and skid to stops at the bottom, going backwards at times.

We build snowmen and make snow forts. We take videos, we snap photos, we post to Snapchat and Facebook and Instagram. Then we move snow, and prepare for the cold that will follow later tonight.

They go to bed, hoping against hope that they might hear of another snow day tomorrow. “It could be, couldn’t it?” they ask with wry grins, fully knowing they are wrong. They scan the weather forecasts, check the “snow day probability app” they have on their phones. They look at the long-range outlooks.

“Maybe next week,” one sighs, finding just a chance of snow on one day. “Maybe we’ll have another snow day soon.”

Subscribe
← Previous: The Brazilian Weatherman Next: Chicks to Chickens, Boys to Men →