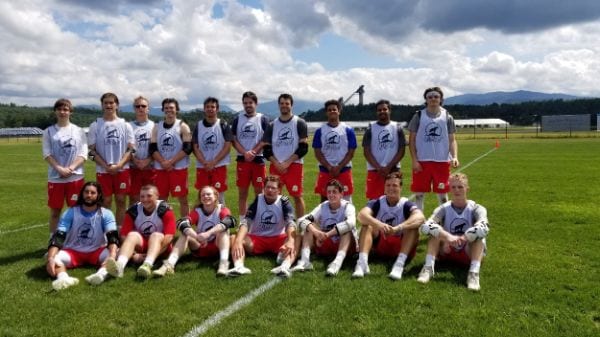 We have scheduled all of our summer activities around this event for the past three years. Summer camps. Family drives to the Midwest. Visits with friends. Even work responsibilities. All have been juggled and carefully coordinated so that this all-important pilgrimage can be accomplished.

Every family has their “thing”, that activity that brings them altogether. For us, for the past seven years, it’s been lacrosse. We didn’t mean to necessarily go down this road. It sort of happened to us.

We first started with the rec league. This was the easiest as a parent: it was filled with other moms and dads from around town. Saturdays were set aside for “jamborees”, often at least part of Sunday was dedicated to watching the kids as well. Practices were in town. Even so, I thought it was a big commitment at the time.

The school stuff followed naturally enough. In some ways, life got easier: a bus took the players. But by that time, we were conditioned to being there. We went anyway, we just had more flexibility with our timing.

Soon we decided a summer travel team was a good idea. I appreciate that I could choose, as a parent, if I wanted to have my son only practice with the team, or attend some of the tournaments, or go to all the tournaments. I was relieved that our whole summer was not dictated by the lacrosse schedule, like our spring was. The games were further away, and they lasted all day. Plus, two boys, at two different ages, often meant that one was playing in Amherst… and the other, at the same time, in Rhode Island.

The flexibility also meant that we might not know any of the other parents. At one of our very first tournaments–at Harvard, no less–I saw some parents who were on their last year of travel team play. They were pros. They had stadium chairs. I had brought a chair for a field. They were holding coffee mugs filled with something warm for the morning. I had nothing. Their coolers full of water and healthy foods were ready. We were resigned to greasy options that no one would be able to stomach. They were dressed in many layers. I was already cold, and hoping that the sun would kick in soon.

Most importantly, there were at least five of them, all sitting together, clearly a strong network of friends. And I was alone.

I dared to ask the jovial group how long they had been “doing this”. “This is the sixth year,” one said. “The last year, end of the road after two kids.” He started to tear up. “And I’d do it all again. In a heartbeat.” The other dads nodded and choked back their emotions.

Right away, we started hearing about “Placid”, the culminating tournament at the end of summer season. It was “the big one”, three (normally work) days full of lacrosse, high level play, teams from all over the nation. Only “really good players” got invited, usually only rising juniors and seniors. While I dreaded scheduling and finding the right lodging, the kids dreamed of goals and commadarie with the team.

When the invite finally came, the whole family trekked to Lake Placid–along with at least another ten players and their families from the area. Summer number two became a special time for just son number two and dad.

Flash forward to the last days of July and the first days of August of this past summer. For the third year in a row, we have readjusted our summer family plans. This year, we leave home son number one–since he has a job. But we add on our daughter, who had been invited to play herself.

I open up the back of our Yukon (the unofficial lacrosse vehicle, by the way–all the parking lots are full of similarly packed full SUV’s). I pull out the collapsible wagon, toss the chairs and their special umbrellas into the bottom, grab cold waters out of cooler number one and sandwich makings out of cooler number two, and snatch up the bag with fresh fruits, nuts and chips to carefully place on top. At the last second, I decide to take the bug spray out the “lacrosse box” (which accompanies us to all games).

We haul everything from one field to another, plopping down and quickly setting up each time. We cheer; we laugh.

There are so many moments of “remember when” at this last tournament for this last year for this group of boys. Some have played together for four seasons now. If they don’t play fall ball, they will only meet again as opponents during their final high school games of this senior year.

The players sit with us for a bit in between games. In the heat of the afternoons, they gather for “cliff jumping”, which scares me to no end, but thrills their teenage brains as they splash and scream. At night, we join the other parents for impromptu pot lucks and cook outs. The boys gather in tents and play card games; the campground acknowledges the end of another great day in the Adriondacks as the light wanes and quiet hours begin.

I had brought my computer with, in the hopes of “accomplishing something” in the evening, or even in the down time during the games. But instead, I choose to ignore the emails that sit unanswered on the phone. The computer beckons, but I don’t pull it out.

For this trip, “accomplishing something” is just being here as son number has his last “Placid” tournament, his lax hurrah. It’s living in the moment, for the moment, with the moment.

Or… just maybe… this is just, simply, “living”.

Subscribe
← Previous: End of Summer Next: A Bamboo Flute Travels to Brattleboro →