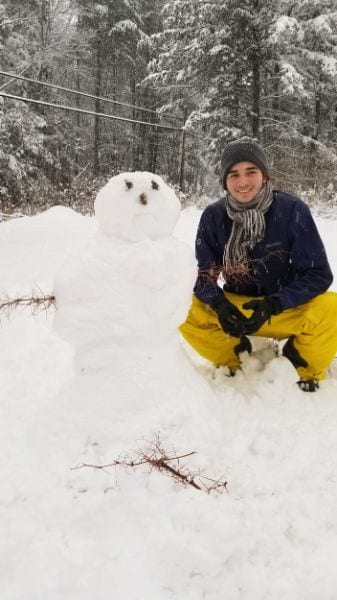 He is outside in shorts and flip flops, his normal house attire. But he’s added on a scarf and a fleece jacket, even a hat, before he’s charged outside.

“Look!” he cries triumphantly. “Look at this! It’s SNOWING!!”

His enthusiasm is so complete and his joy so evident

that everyone around him cracks up. We watch as he chases the snowflakes around in circles, accompanying their swirling dance towards the pavement.

Much to his chagrin, the melting is instantaneous. He looks down at the ground, still oblivious to the cold that seeps into his exposed skin.

“They will melt right now,” I tell our Brazilian exchange student. “But soon… soon they will really stick. The ground is not quite cold enough yet.”

“OK,” he says, still staring at the snow falling from the sky. He appears so mesmerized that all of us start to look harder at the little white droplets of cold. He has his cell phone out, and is taking photo after photo.

He smiles over at us. “I’ve never seen this! It’s snowing!”

I am on my way out to pick up two more kids, so I have to leave him, as much as I would like to bear witness to his discovery of snow. “Yes,” I agree. “But typically people don’t wear flip flops and shorts to stand out in it. Aren’t you cold?”

My second son, his host brother, appears at my car door. He is armed with a camera, too. “I’m taking photos of him, Mom,” he tells me. “He is so excited! It will be perfect for my photography class.”

Later that night, after the quick snow flakes have long since past and have not accumulated at all, he is still glowing, so happy he is to have finally experienced snow. “You will see more snow,” I tell him. “And then it will stick, and you’ll be able to do things in it.”

“That’s what I want,” he declares. He has been told about snow angels, he tells me. And he’s seen skiing on TV, downhill, cross country, or even snowboarding. Maybe he should try that, he wonders aloud?

We talk about the weather. Brazil is a large country, and there are areas that experience an occasional quick freeze, or even a “heavy frost” that they will call “snow”. But he comes from the north, near the equator. The lowest temperature he’s seen–before he came here–was only about 60 F. After suffering through fall nights that dropped to this relatively mild temperature (because truly, everything in life is relative), he is a huge fan of long underwear.

He tells his friends about the snowflakes, the “so cold, oh so cold” temperatures of his new home here in Vermont. “You mean you really see below zero?” he asks incredulously. When I assure him that we do–and that he will, too–he screws up his face in doubt.

This is only October, and he does not want to believe me, because he already feels the cold. Even worse, he fears the cold. If this is October, he thinks, what must January–the famous “dead of winter” he’s been told about–bring?

As the weather continues to change, he begins to track it. I explain that he should really learn Fahrenheit, and forget Celsius. “It sounds better,” I tell him. “We don’t really worry about temperatures being “really cold” until it gets to below zero. But with Celsius, zero Fahrenheit is already -18. Wouldn’t you rather think of it as just zero?”

I smile, perhaps even little sadistically, because, I, too, would prefer to stay in his climatological reality. “Oh, you’ll see that. Easily. Matter of fact, here’s a fun thing to know: -40 C is the same as -40 F.”

I have pity. “Probably not. Really, I hope not. But it happens. The coldest I’ve personally ever been in was -60 F.” His eyes glaze over, and I reassure him again that he needs the proper clothing and life will go on.

October falls into November, and November fades into December. Soon I realize that he has a new habit. Each morning, he announces the weather. He tells us all the exact predictions, following a weather app he’s downloaded to his phone. He even predicts the first major snowfall.

By early January, he remains impressed by the power of Mother Nature and her spouse of Old Man Winter. “My friends and family can’t believe how cold it is here,” he says as he avoids going outside for yet another day during the most brutal beginning to the new year.

By this point, he is grateful for the small breaks we get. Seeing a weather forecast above 32 F/0 C, he smiles with relief.

“Tomorrow it’s going to be above 0. It will be so warm!” he declares, without a trace of sarcasm or dismay. “But then it will get cold again, I see…”

Subscribe
← Previous: A Great Time for Basketball Next: The Lure of a Snow Day →