The Arrival of the Exchange Students 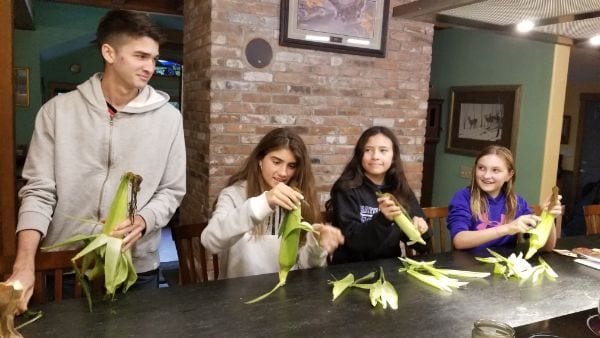 We drive the three hours home from dropping off our first born at college for the first time.

But we arrive home to a fuller house than we’ve left.

For the beginning of the year at least, we’ve agreed to host two academic year exchange students. One is a boy, from Brazil, and the other is a girl, from Spain.

Due to no fault of anyone’s, the outgoing and incoming world collided into one day for our family. Both are monumentous occasions for everyone involved.

While we two parents traveled south, several family friends rallied to help with our Brazilian and Spanish children’s arrival. One couple helped pick up the Brazilian while they were collecting their own Belgium student… another took the Brazilian and our two kids for a tour of the town… another friend drove down and back to the airport to collect our Spanish girl, and then took all the kids out for supper.

By the time we all met, all anyone had energy for was a simple “hello, pleased to meet you”, and a tour of house necessities, like bathrooms and beds. It was the next morning before we really started to get to know each other.

Our first few days are filled with orientation, class schedule adjustments and coordination, back-to-school shopping, and soccer practices for three of the four kids. Tuesday is a special day for our new middle schooler. Wednesday is a first-day for both the Brazilian and the Spanish students, with our junior son happily showing them the ropes.

It seems remarkable how quickly you just “adjust” to having exchange students in your home. At first, of course, there is the inevitable coordination of showers, and the distribution of household responsibilities. There is the first trip to the super market, where you learn that the Brazilian doesn’t really want to eat any vegetables–but orange juice is nearly a food group all to its own.

The trickiest is scheduling the after school activities. I feel a bit like an air traffic controller in the morning. Figuring out who is picking up whom, at what time, and which field, is a job in and of itself. Due to weather, games and practices also move times, locations and even days. The most carefully laid plans can be tossed to the wind with excessive heat warnings or thunderstorms.

But it is quickly the new normal for our house. We figure out the use of cell phones and messaging applications. We happily agree to car pooling and sharing of rides. We put all the home soccer games into our calendars and set off to see as many as we can for the (blessedly) short season.

It all changes a bit when there are more in the house. But it is still very much the same. The routine has returned.

Subscribe
← Previous: A Side of Familiarity Within the Slice of Life Next: College Drop Off Day →