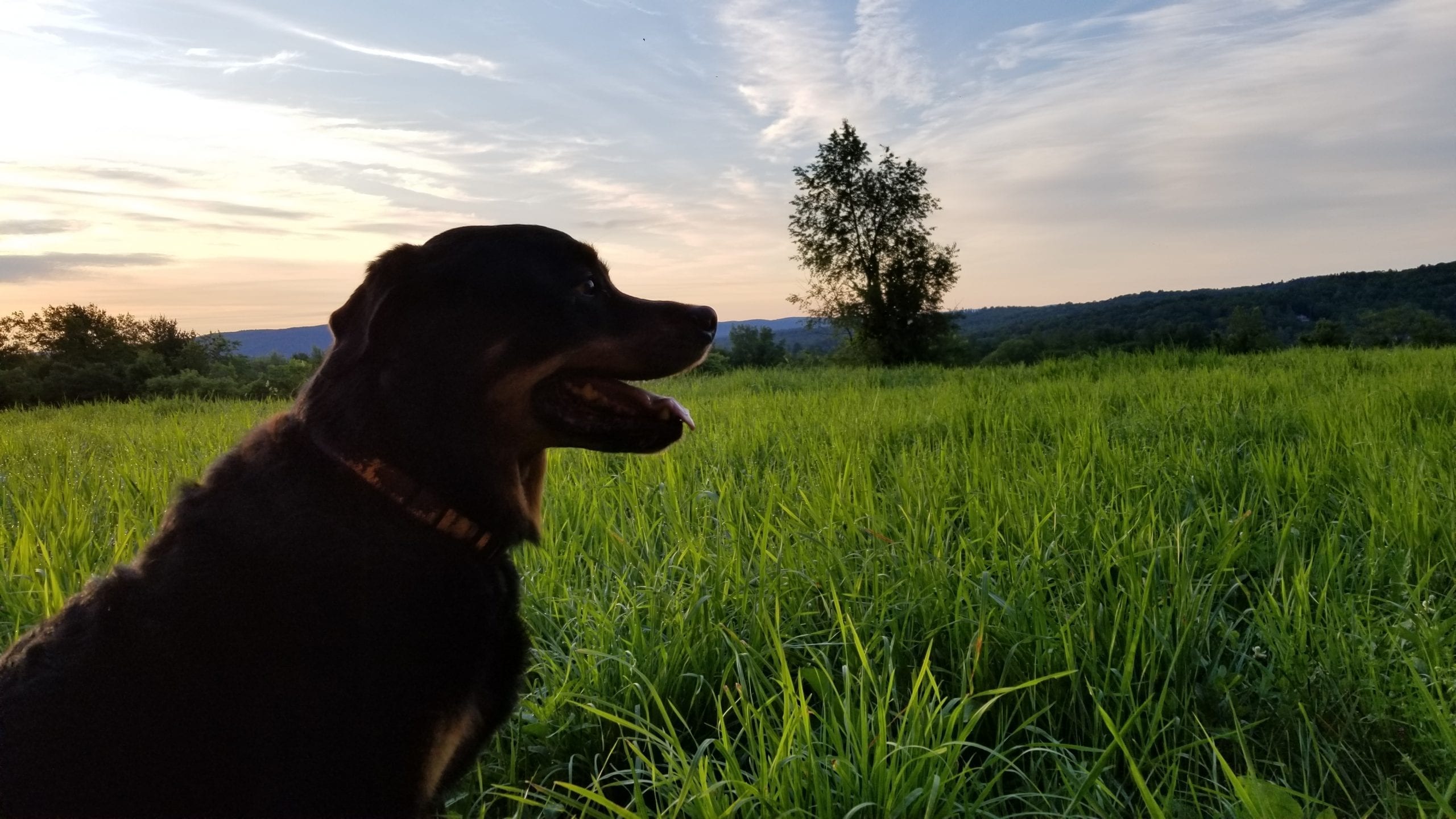 I will begin by saying that some might find this a sad story.

It’s actually a story of love. Mostly, it’s about life.

It all started the day after the Fourth of July in 2008, almost 12 years ago. Well, really, it began even further back, with a decision made by my husband before we had even met… long before we had married, or had children.

Way back in that ancient family history, my husband chose to adopt a puppy. She was a Rottweiler, with one eighth lab mixed in. He named her Allie, and she was our world for five too-short years. She was our constant chaperone during our years of dating—she even sat between us at first, seeing me as the interloper. Soon, she was our constant companion, the center of our lives… until we lost her to Addison’s disease.

We followed with the adoption of two more Rottweilers–“double trouble” as the family patriarch aptly named them: Tara and Scarlet. These were the two who accompanied me on walks during pregnancy and even while in labor… the two who flanked the baby jogger during family walks—first a single, blue jogger, followed soon by the fancy red double baby jogger, used when our two sons were both small. These were the dogs who happily accepted our daughter when she came into our family, quickly claiming her as their newest family member to keep safe.

When Scarlet succumbed to cancer at age 11, our family then included one son at 11, the second son at age 9, and our daughter at age 3… and one pretty lost-looking Tara.

When I found a litter of Rotties listed in our local paper, I called it a “sign from God”.

And that’s how, on July 5, 2008, Abby joined “Aunt Tara”. A year and a half later, Tara, too, lost her battle with cancer… and Sofie, a yellow lab, balanced our family yet again.

A lot happens in a household in twelve years—especially when there are young children also growing up. Within the proverbial blink of an eye, the little kids who were laughing their way through learning to ride a bike are now tweens who are playing video games with friends until the wee hours of the morning. And then, seemingly suddenly and astonishingly, they are teens–with driver’s licenses and sports schedules that require near full-time coordination. We turn around again, and our sons are young men–with girlfriends who are young ladies in their own right—and our daughter is right behind them.

High school’s mad rush of activity ceases for one, and then two, of the family. One heads off to college, the two years later, the other son jumps headfirst into work/apprentice. We drop to only one in high school, although we add in Spanish daughter number three to balance it out a bit.

Through it all, there is this relative constant of the dogs. Once through puppyhood—that adorable year or so of cuteness and intensive training—dogs are pretty straight forward. There is no worry about them driving, their making good choices, or their succumbing to their not-yet-formed brains’ stupid ideas. The dogs are steady. Reliable. Faithful.

Until, one day, there is that little sign of aging coming on. A little limp that needs a bit of pampering.

The weekday morning run just after dawn becomes a sunrise hike. I wonder how I ever started my day any other way.

But then last winter, Abby’s “little limp” was getting much worse. Soon, she was struggling to walk across the living room. The vet confirms our greatest fear: cancer once again. She estimates three to six months.

Unexpectedly, a miracle happens. A friend insists we try a herbal supplement that has been shown to work against cancer. Just as the weather turns towards spring, Abby is walking normally again. She insists on the morning hikes as soon as they weather permits.

Knowing we are now on truly borrowed time, I cherish these days. I take more photos—mainly of them—in the glorious golden hour light of early dawn.

I adjust my pace… then the route… the length… the frequency. By August, I am driving to the top of our hill, and we watch the sunrises together from the four-wheeler. For the fall, we switch to short, once-a-week late afternoon strolls as a family.

I consciously and consistently say yes to any request Abby has, whenever I can. Yes, she can come in the car for a ride. Yes, she can have a bite from my lunch. Yes, I will slide over to give you more couch space. Yes, I will go up to have “snuggle time” tonight.

Then one Wednesday, Abby is different. She goes outside, and she doesn’t want to come back in. She refuses to eat. She doesn’t move, except to crawl to the water dish, where she then stays. She is clear about what is happening.

Purposely, and without discussion, everyone shifts focus.

Abby will not be left alone.

The weekend brings everyone home, and the usual hubbub of activity of people coming through. Abby is literally in the center of everything. She is in the entry, and she wags her tail at all who come in.

We all kind of set up camp next to her. One of us sleeps in a cot next to her each night. We work on laptops. We do projects. We play games. We watch football. Everything just kind of shifts, all so that everyone is always near Abby.

It’s a weekend of purpose, of deliberate actions, of warmth and of acceptance in each of our own ways.

On that final morning, I stroke Abby’s head. I narrate the sunrise’s beauty to her this time. I remind her of all those special mornings walks. Now it’s time, I tell her, time to go find Aunt Tara, to meet Scarlet and to thank Allie.

I am sad, terribly sad.

But I am also at peace. We have done our part to give back in equal measure what this special being has given to our family: we have surrounded our Abby with love.

A slide show of our extraordinary Abby:

Subscribe
← Previous: Remembering my very first 4-H calf Next: The Power of the Unit →