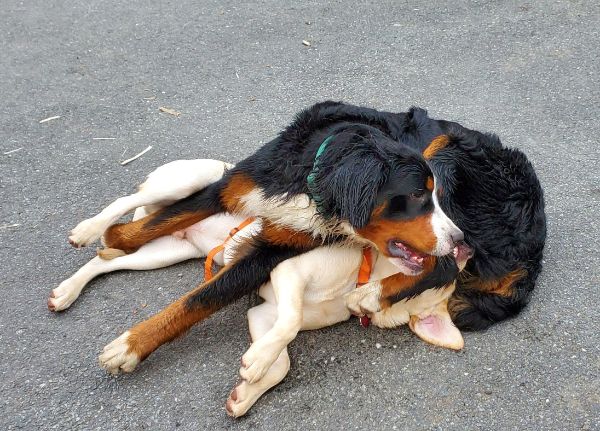 What a great dog day I’ve had today!

I started with a sunrise walk with Sully, a five-month-old yellow lab puppy—and our own Aspen, the eleven-month-old Berner.  The two of them play hard!  Sully goes home exhausted, whic is an excellent thing for Labrador puppies in general.

In the early afternoon, Lupo arrived.  He is gorgeous Irish setter, born the very end of March.  That makes him about eight months old now.  He’s here because his mother has come into heat.  Because of COVID and the puppy boom, there are no appointments for him to be neutered.

It’s a lot of young-dog energy in the house right now. Our twelve-year-old lab is asserting her place: she has claimed Lupo’s bed, I think mainly just to lord her dominance over him.  Lupo obliges Sofie, and spends a while barking and crying at her.  Eventually she goes to her area, laughing in her own older dog way. As long as he knows his place, I think she’s happy to have someone else tiring Aspen out.

None of these three pups could rightly be called “COVID puppies.”  Sully’s family was on waiting list with the lab breeder for about a year.  Lupo’s mom was a planned litter, bred before the lockdowns started.  We sought out Aspen in early February, right after we lost our Rottie to a year long fight with cancer.

The silver lining for these dogs—actually, there are typically another two Golden Retrievers who join the fun—is how much they have been together.

I’m sure that we friends would have occasionally joined up for walks and romps.  But with the COVID quarantine and social distancing rules, doggie playdates, long hikes, pond swims and outside gatherings with dogs in tow have become pretty much our only socialization in Vermont.

All in all, this silver lining has led to easier puppy raising, better behaved dogs and lots of calories burned by both humans and canines!