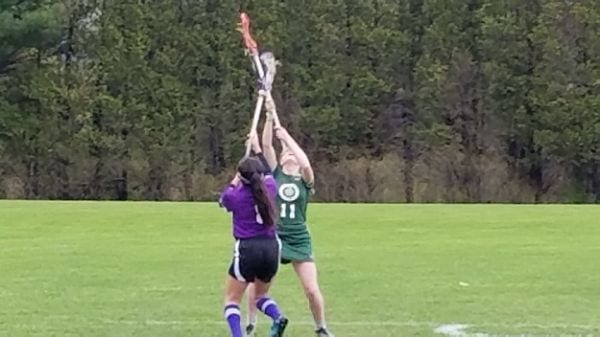 Some sort of a dish for the potluck? Check.

One child with one parent, already at the Kiwani’s Shelter at the park? Other parent scurrying to get there quickly? Check.

Other two children off to their own lacrosse end-of-season celebration? Check.

Sunday’s night high school graduation week focus has been swung. We’re back in the midst of normal, which, for our family, has become racing from one lacrosse game to another. It’s become the family game, with all three kids enjoying playing it, and the parents enjoying watching it.

The rec department included a third and fourth grade team this year, which was truly adorable to watch. They were sweetness off the field–and fierceness when on. They sit pretty quietly at the picnic, near to their parents and siblings.

Our daughter’s team of fifth and sixth graders wanders from the food to the woods, giggling and whispering together. They studiously ignore their parents.

It’s a tricky age, for a girl, those years of 11 and 12. Not yet a true teenager, but definitely not a “little girl” anymore, there were many…. let’s call them “moments”… when not all was sunny and rosy. We parents commiserated with each other when we witnessed those cringe-worthy eye rolls and sighs. We exchanged looks when the accusation of “You forgot my (fill in the blank)” flew by, which pretty much happened every game to at least one family.

The seventh and eighth grade girls seem far older, with their added two years and middle school experiences. They are the champions of the night, the ones that the younger girls look up to in many ways, not the least being that they “really know how to play”.

They have a new tradition for their last tournament of the season, held in Middlebury. A couple of years ago, a few frugal–and adventurous–moms decided to pitch tents and camp with the girls. They are the type who fearlessly face the outdoors, no matter how much rain might fall (which seems to happen almost every year). A new tradition was born, and now, it seems to have become a right of passage. They assure we dubious sixth grade moms that we, too, will enjoy it next year.

The sport of lacrosse has become really important to them; those basic catching and throwing skills they have worked so hard on all season finally started to pay off in their total scores in the last games. Their teammates have become friends and their time together important in many ways. When things went well on the field, their confidence shone, and they all glowed.

But the lacrosse season, as good as it was, is not really where the sixth graders’ minds are focused. Even after they finished their last game just two days earlier, on Saturday, their chatter was all about getting ready for their big night. We had left lacrosse to head to the mall. Our soon-to-be-graduate needed a swimsuit for the swimming party for their swim party (a bikini is really the only thing one should wear when in sixth grade, she stated)… she thought a new dress was in order for the graduation itself (off the shoulder would make her happy, she pointed out)… she believed she should have her nails done (she would use her own money, she said)… and she made sure that she could get her hair done (the appointment is set, she confirmed yet again).