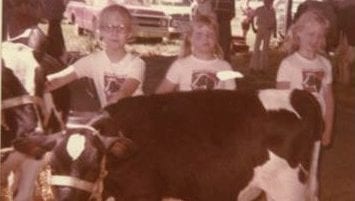 I have been thinking this early January about my very first calf, whose name was Merica.

As an eight-year-old child, I liked her name. And I loved her even more.

I picked her out in the early spring, and she needed to be an early January calf in order to qualify for the classes at the fair that summer. With a birthday of January 9th, she was pretty close to the beginning of her age group. My parents assured me that this was a good thing.

Once school was out, I started to work with her in earnest. Nearly every day, my father would help me get her out of the pen, and “lead” her down to the swing set, where we would tie her out for the rest of the day. She took a long time to accept the idea of the halter pulling her, but eventually she got the hang of it. Or, truthfully, perhaps I learned how to lead her, as the two of us were truly very inexperienced in the world of fairs and cattle.

Either way, we were a team. I always thought she liked hearing my sit next to her, swinging and singing in the afternoons. I decided she and I should practice some fire drills, “just in case of a fire”. I’d go over, untie her and lead her quickly around a quick loop. I’d bring her to water, following the sage advice from my aunts, who insisted that everything about the halter be as positive as possible.

The show season was done by August, and Merica went back to spending whole days in the barn with other cow friends. My visits were not as frequent, with my days taken up by school. But whenever I went out, she’d come over to see me, pushing up against me and demanding her attention.

When January came around, I told my mother that I should bring Merica some birthday cake. My mom is a smart woman, and she supported my idea. She helped me bake the cake, frost it, and cut a healthy piece to put on a paper plate to haul out to the heifer shed.

Merica ran up, as normal, and happily and not-so-neatly gulped down her first taste of birthday cake. For as long as Merica remained in the herd, she had her cake… and ate it, too!