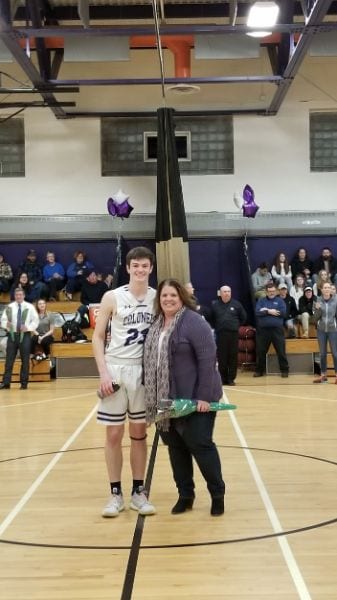 Eleven days. The first eleven days in the month of March.

That’s all it took to see some pretty spectacular stuff out of our schools.

We started on Friday night, March 1st. It was senior night for the varsity boys’ basketball game. We’ve watched these boys play together since seventh grade. I’ve come to love/hate senior night celebrations: I love the energy and the recognition… and I hate the ending it signifies. The 71-57 win that night meant a going out with a win, and that put a lot of smiles on a lot of faces as we stepped back into the cold.

The next day, on Saturday, we headed to our local ice rink at Memorial Park. We joined the throngs standing two deep on the sides, and smashed together happily in the bleacher section. With impressive play by several different players–and tons of raucous cheering all around–our boys took the game at 4-1!

Tuesday night, it was hockey again–but this time the girls. Inspired by their passion-filled play whenever we’d watched them, a friend and I decided to travel “all the way” to Barre for their playoff game. A little over two hours’ drive, on a pretty frigid night, to sit in a pretty dang cold ice rink would not be my first pick for fun in early March. But the girls’ efforts completely made up for the cold (and toes do thaw out eventually anyway): a win at 5-3.

Wednesday night, the boys’ basketball team moved onto their playoff game at Manchester. The boys started off strong, taking an early lead of 10 to 0. By the end, the balance had shifted, and we lost. All of us gave a standing ovation to them as they came off the court for a definite end to their season.

Thursday night, I stopped in to talk with the Oak Grove Elementary School parent group about exchange students. Their enthusiasm for their school and their joy at helping make it a welcoming place for all just shone through all they talked about.

After a quick drive, I arrived on to BAM’s “spring” concert. (As the band director pointed out, perhaps “late winter” would be a better name.) The warmth in the auditorium made up for the lack of spring outside, though. Parents, grand parents, siblings and friends packed the place, listening with delight to jazz band, concert band, a small ensemble vocal group, the full chorus–and a rousing percussion group that performed on five gallon pails– turned upside down!

Friday afternoon meant a semi-final home game back on the ice for the girls. They left nothing behind, played their hearts out… and came up short. It was a heartfelt ovation we all gave them as they skated off the ice for their final time this year.

Sunday brought us down to “The Bubble” for a lacrosse tournament, where we watched several of our team’s boys play together yet again. They almost took it all, coming in at second place only when their opponents managed to put the ball in the net one more time with only seconds remaining.

The culmination of the eleven days was Tuesday for our family. Once a year, all the schools in our supervisory union come together for a band performance unlike any other. The elementary schools go first… then the middle school bands… then the jazz bands… and finally, the high school. It was a delightful display of music from every group.

Eleven days of showcases. From the ice to the court to the musical treats… thanks for the memories!