Driving to a Playoff Win 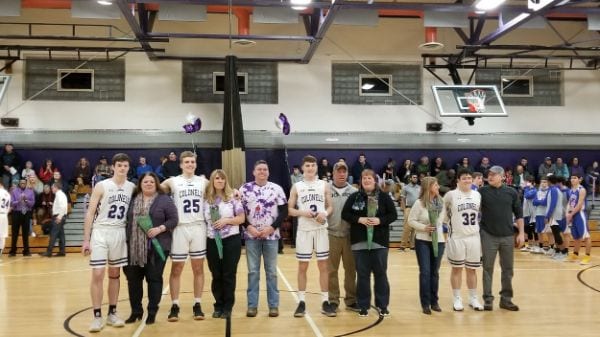 “I am going to the girls’ playoff game tonight,” my junior son texts me.

I text back the standard questions: “Where? What time? Who is going? Who’s driving?”

He shoots back his replies. “Bennington. 7 PM start. I’m driving some friends.”

Then, seconds later, the phone dings with another arrival: “And you already said I could go.”

Interestingly, I have zero recollection of any conversation about any driving over to any basketball game. “Call me,” I type back.

He pleads his case, although truly, I can’t believe that I have ever said yes to this plan, and I think he has really not talked about this at all. However, I am nearly always up for watching a basketball game–and a playoff is hard to beat.

At this point, in his next text, he drives it home quite succinctly. “You are embarrassing me. I can drive fine. I am 17.”

He’s right, I know. He is (“only”) 17. It’s “only” 45 minutes away. It’s “only” up and over the mountain. And, it’s also “only” three other teenagers in his car with him. So, his two embarrassing parents discuss this, and we eventually come to a compromise. He will drive, with all the teenagers in his car. My friend and I will follow in my car. Some embarrassment still remains.

The ladies on both teams have come to play, and both mean to win tonight. Whoever loses ends their season, and neither one is going home easily.

It’s a constant battle on each end, usually matching shot for shot. Every call that goes against us is questioned by our fans, with loud complaints yelled towards the officials. Every great drive is greeted with cheers by one side, groans by the other.

Our team is up at the half, but only by two points. A half-time talk from their coach brings them back to the court ready to push forward, and by the end of the third, we’ve increased it to 41 to 27. Our side is impressed. The opponents’ fans are quieter… until their girls pull forward in the fourth. Excellent three-point shooting by several different players brings the crowd to their feet with expectation of turning the game their way yet.

The battle continues, with each team fighting hard, lunging for balls as they narrowly miss going out of bounds, and jockeying for rebounding positions under the basket. The score gap lessens. Our lead has dwindled to only five, and we still have over five minutes left. “Kill the clock” becomes the rallying cry from the adults. “Settle!” the parents encourage their daughters as they run past.

Now we are down to only two minutes left, with only one basket separating the two teams. Our girls nearly snatch the ball with crafty, quick moves–once, twice, three times nearly in a row. Each time, the frustration for our opposition mounts.

The clock steadily counts down. Our team passes handily, listening to their coaches admonitions to “play smart” and not take unnecessary risks. The fouls commence. Our opponents have no choice and have to stop the clock. Our girls are sent to the line, and free throws increase our lead.

The final buzzer sounds, and the score is reflective of the free-throws garnered by their fouls. It’s our win tonight, 51 to 45. Our girls are ecstatic, although I can’t help but to feel for the white-jerseyed young ladies who pass by me with tears running down their face. It was a fantastic showing by both teams. But only one team can win.

We watch as the high school students have a few words thrown about between them. They are tough rivals always, in every sport. “We’ll see what happens on Friday,” the losing kids taunt. The final boys’ game will be played in this same gym in just three days. Tempers have flared before, and administrators are quick to make their presence known.

The young posse of teenage boys joins up with the jubilant female throng of players and parents, all milling about and sharing congratulations. Soon we are off to the parking lots, agreeing to stop at the gas station for a quick snack before the drive home.

As I get into line to pay, my son sidles up next to me with his jerky and Gatorade.

“Since you are here,” he says with a wry grin, “you’re paying.” His friends chuckle. I smile, and I hand over the credit card.