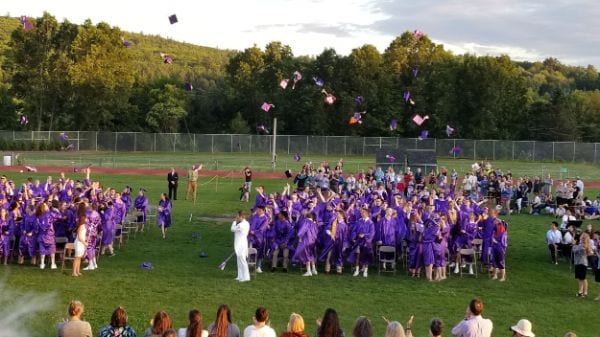 And before we realize it, high school graduation day is here.

We have spent Wednesday playing tourist with the Illinois-based relatives. With elementary school graduation finished on Tuesday night, our daughter was thrilled to start Wednesday morning by lording it over her brothers. “You have to go to school today,” she noted with glee, “and I don’t.”

With the boys off to take finals, we trekked around southern Vermont. In the course of just a day, we drove peaceful country roads between West Brattleboro and Guilford… meandered and shopped our way through downtown Brattleboro… ate while overlooking the beautiful Connecticut River… curved our way to Newfane… took in the 100 mile view from Hogback…visited Mt. Snow so Grandma could try to visualize her grandchildren cruising downhill at breakneck speeds (perhaps she might have slept better without this stop?)… paused to contemplate the peace of South Pond… and enjoyed a family meal all together, in one place, at one time. (That might have been the miracle of the week.)

Thursday and Friday brought innumerable party details and set up. We had decided to do one party for seven graduates, and most decisions needed to be agreed upon by all the families. How much pulled pork is enough? How many people will come? Will they all eat? How much cake? Should the cake be vanilla or chocolate? What should the cake say? What if it rains? How many tables and chairs can we borrow?

Hamburger buns and chips arrived at our house (“definitely not enough salsa, Mom, you need to have more salsa, seriously”). Watermelons appeared (“how many of those do you need, Mom?”). Coolers were pulled out of the garage, graduation-themed paper goods came up from the basement, and iced tea and lemonade mixers lined the kitchen countertops.

But now it is Friday, and it is here.

“I don’t know why people think this is such a big deal,” our senior son says. “I am just graduating one school to go to another one.”

I understand this; I remember feeling this way myself as I was leaving high school. Of course, now, I know how much life changes after high school, how it is not just leaving from one school to go to another one.

But he doesn’t know this, not yet. And it is his to find out, not something that I can transmit to him somehow. Whatever I say will just be words, so I don’t even bother. I just tell him that the party is happening.

We pile into the gym at the high school, sad that the rain has cancelled the outside festivities we had hoped for. Since we are only allowed a limited number of people in the audience, we tell the Illinois-based relatives to not bother with coming until the party on Saturday. They can try to watch it on the live stream, just like the graduate’s sophomore brother is doing from the auditorium.

The music starts, and the graduates file in. It’s oddly reminiscent of their middle school ceremony only four years before: the same place, similar music and colored balloons.

I don’t really see each student alone. I see some odd host of memories floating down around them.

I see one in my house, decorating a Christmas cookie train and accidentally popping a peanut-filled candy into his mouth, and my running with him to his house for an emergency dose of medication, all the while fighting for cell signal so his mother can tell me what I am supposed to do. I see him coming sleepily down the stairs after spending the night at our house… laughing as he wins “the train game” at our kitchen table…dodging for a ball while defending the goal in lacrosse… standing proudly as he receives his Eagle Scout award just two weeks earlier…

The next one makes me smile; he always makes me smile–and laugh. I see his shock of hair uncontrollably sticking out from under helmets–hockey and lacrosse…his determination as he holds off an opponent in either of the games… a sixth grader on the soccer field with his dad coaching, going into double overtime and winning in what we all remember as an “epic game”…his comical face as he mocks me in our kitchen…

I choke back emotions as I watch another coming in. I see him at the park, playing kindergarten soccer and kicking the ball with all his might…holding chicks from a surprise hatching at his house when he was in second grade…cuddling a new puppy on top of mountain while we hiked together…chuckling when he hears that lacrosse opponents are calling him “fierce” behind his back…threading a fishhook at a house we rented together in Maine…napping in the car when we left early in the morning for tournaments…listening intently to Bernie Sanders at a rally…

And there is my own son. There are so many flashes through my head I can’t keep up. They threaten to overwhelm me, and I am determined not to be “one of those mothers” during a happy night. I decide to consciously shut it down, to not go down memory lane with him. It’s too much. It seems too final, and, like my son said, “it’s just leaving one school for another.”

Instead, I concentrate on the moment we are in. Tonight is not the time to dwell on where he will be in the fall, how much we’ll see him then as compared to now, how we will miss him.

No. Now is the celebration of what’s he’s done, and what all of them have accomplished. It’s his night, it’s all about him, and the other seniors we’ve happily watched growing up for the last 18 or 19 years.

Where will they all be next year at this time? How far will they go? What will we hear from them, from their impacts on this world we all share?

Suddenly, their hats are flying into the air and they are cheering, bouncing, hugging. They are exuberant as they process forward and then mob together as they make their way out of the gym, hurtling one last time together, into their unknown.