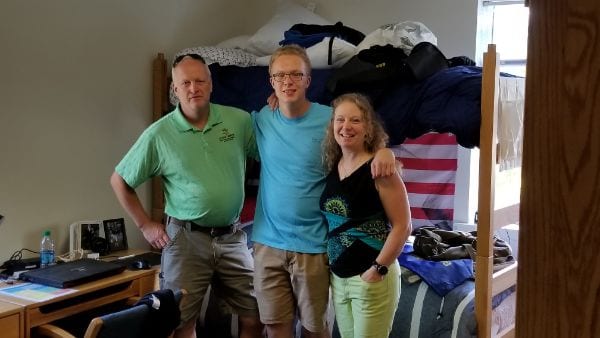 The alarm sounds quickly when you sleep little.

It comes even faster when you have to get up at 3.45 and pack the last of the college move into your car.

He’ll be in a triple, a room with the space supposedly designed for two,

but equipped with three beds to sleep him and two roommates. Someone will get the top bunk, and my husband believes it shouldn’t be our son just because we are the last to arrive. I have urged him to ask his roommates who wants to sleep where, and just work this out ahead of time. But I am told in no uncertain terms that you “just don’t do that”. And so, we’ve resolved to be there right at the start of move-in, see who else is there and how it shakes out.

We drive in mostly silence, two parents and one adult child. There is no denying it now, we are officially at this juncture.

For the last three weeks, I’ve listened to other moms whose children’s schedules started a bit earlier. Some colleges have special week-long adventures, a camping trip or a bunch of exploratory and getting-to-know-one-another classes, to start off their entrance to a school. Their parents report infrequent phone calls, with kids so busy that they can barely find a time that they are available to check-in. The ones who have gone into the military have it the worst: their sons no longer have cell phones, except for short blocks of specific times.

I am determined to not be “one of those moms”. This is a good day, and it is not about me anyway. It’s about him, all about him.

The campus is, as always, beautiful. His sits on the coast here in New England, with about half the dorm rooms overlooking a peaceful Atlantic Ocean bay. The other dorms mostly overlook a few ponds, and we spy a turtle in the middle. There are classrooms where the view would steal my attention from any topic being discussed, and grassy lawns that sprawl downwards towards the sparkling water.

We arrive to find one of the roommates has already moved everything a day before, claiming the loft bed and accompanying desk for himself. The other roommate has just arrived–and has laid his stuff on the lower bed.

“You’ve got the top bunk,” my husband says, announcing the obvious. Our son just shrugs; he didn’t really care that much anyway. I crush the thought of how nice a few more hours of sleep might have been and agree that, yes, indeed, he is the proud owner of the top bunk.

We busy ourselves with the chores of unloading, carrying up, unpacking and putting into place. My sister, who lives a mere 12 minutes away, has come with her five-year-old daughter. The smallish dorm room is already packed with two stacked bunkbeds, a loft bed, three desks, three dressers and two closets. It feels even tighter as two students and a combined seven family members are all trying to help unpack. The other family members quickly give up and retreat to the hallways. It is left to the moms to finish the unpacking.

Just like the “accepted students’ days” and the “open houses”, everything is well coordinated. It’s a gorgeous day, and the lunch is served under a huge tent.

The incoming students are taken to prepare themselves for convocation, and we are left with about two hours. We decide to go to Target, just to make sure that there is not anything more that he might need. Even though this university’s food service ranks in the top five percent in the nation, we still buy him “snacks” to have in his room. I splurge and put a special card game in that I know he likes, one I’ve refused to buy as a “family game”. It seems like the type of game that will be fun for college students, I think as I throw it in the cart.

We arrive back on time for the convocation ceremony, which begins and ends with each major marching together, accompanied by bag pipes. The provost borrows imagery appropriate for the nautical setting, and compares each incoming student to a ship in the ocean. “You are all in the same ocean, and you must all learn the same basics,” he says. “But each of you will chart your own course.”

The end of the ceremony gently reminds all the parents that “the unofficial official time for you to say your final goodbyes is at 5 PM.” The statement is greeted with nervous laughter by both students and parents alike.

We, like most every other parent there, accompany our son back to his dorm room. We give him our last purchases of such healthy foods as Poptarts (“Gotta have Poptarts,” my husband insisted), and lime Tortilla chips. He is surprised and touched by my card game gift, and I am oddly, supremely happy with my last-second splurge.

And then, it’s over.

There is no more activity scheduled that we must do. There are no more last minute things to buy. There is nothing more we should say.

Subscribe
← Previous: The Arrival of the Exchange Students Next: The Final Day →