Chicks to Chickens, Boys to Men 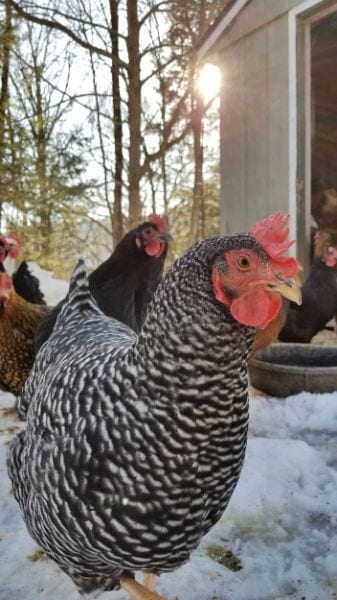 I look over to my college-age son, trying to figure out what has him so excited. Seeing the magazine in his hand, I smile. It’s the Murray McMurray Chicken Catalog, a delightfully enticing sales piece from a hatchery all the way out in Iowa. And, oh, the memories this little mailer brings.

Our foray into the poultry world started very innocently, apparently as it does for many. This one I blame squarely on the neighbors.

Our two boys were truly young boys at the time, the oldest at six and the youngest at four. The two boys, plus the neighbor’s son, spent most of their summer traveling back and forth between our two homes. The main attraction at the neighbor’s home? Baby chicks. Watching them grow every day became a fascination for my two, and they grew rather attached to them as they played with them and chased them around outside during the long summer’s days.

But when the fall rolled around, the females and males were clearly identifiable. As could be expected, about half were males, roosters who loudly hailed the morning’s arrival with their crows heard all around our neighborhood. The “chicken man” had been contacted, and the kids were informed that the roosters were about to leave the next day. Seeing my eldest son’s dismay, and trying to soften the blow, the kind hearted neighbor mom said, “If your mother and father say it’s OK, you can take one to your place.”

How does one say no to a seven year-old son who holds back tears as he talks about the chicks that he has watched grow up, especially as he presents the plans he has for housing and care for this rooster?

Roosty happily greeted all visitors to the house, typically with Scarlet, one of our Rottweilers alongside him. The two of them made a fine pair, often sitting together on the porch. It seemed that neither of them really understood that they were chicken and dog; they were just friends often enjoying a patch of sunlight together.

Tara, our other Rottweiler, however, had a different eye for Roosty, right from the very beginning. She resented the interloper, and it was soon clear that only her inherent sense of following my commands kept Roosty safe when near her.

A month passed, rather enjoyably with our “pet rooster”. Our son’s birthday arrived, and I rushed down to the school with cupcakes in the early afternoon. While I was gone, my friend (and employee) let Tara out. In the ten seconds it took for her to return to her desk and glance out the window… Roosty had become a pile of feathers. There was nothing she could do; in my absence, Tara had reclaimed her top dog position with a vengance.

After some moments of desperation (and even some serious, silly consideration of trying to find an identical rooster to replace Roosty in the two hours we had before the kids would be home), my husband cleaned up the pillow explosion outside the office. We held a burial that same afternoon–and then held a special birthday supper to complete the unforgettable day.

The rest of the winter was spent pouring over the Murray McMurray chicken catalog. Every member of the family perused it at length. The descriptions are fascinating: “very gentle giants” or “prolific producers and very alert”. The photos of the real-life chicks are cute; the drawings of adults a curious mix of science book-meets-art.

I have so many memories of the kids with the chicks and the chickens. There was their enthusiasm for the arrival of the baby chicks in the mail–something looked forward to even more than a trip to Disneyworld that same year.

There was that emergency call to the eye doctor when one chick looked at the shininess of one son’s eye–and pecked it, hard. (The chicken became a favorite–and was named, of course, “Pecker”.)

There was the Mother’s Day when the boys decided to “teach the chickens to fly”. Apparently throwing them up against the roof of the chicken coop really can knock them out… and apparently, chickens are more resilient than I knew.

There was the way the two boys carried their favorite hens up to their new sister, the day after she arrived to our family.

There were the egg sales in elementary school, the budding enterpreunism as the oldest, as a fourth-grader, dreamed of becoming a chicken farmer.

There was the “Polish Christmas Tree”, when the boys “decorated” a lilac bush, in June, by putting all the Polish chickens at various spots on the tree, and declared it “just like a Christmas tree!”

There were the incubations in their third-grade classrooms… the expectations of the hatch; the joy of watching a new life literally come out of its shell; the concerns for the ones who were slow; the eventual sadness when someone didn’t make it; the groups of kids cooing over their cuteness.

“Don’t you think we should get just a few more again this year?” my son is asking me, pulling me out of my mental journey down memory lane.

How can I just shoot him down? “I don’t know,” I hedge and peer over his shoulder.

“Tell me what you’re thinking,” I say as I pause to savor the moment yet again.

Subscribe
← Previous: The Lure of a Snow Day Next: A Side of Familiarity Within the Slice of Life →