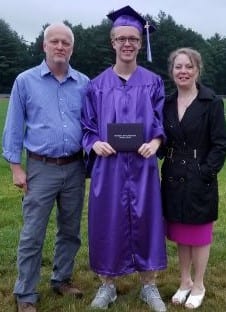 It’s not like this was a surprise. After all, it’s pretty much standard expectations that a child enters his official school career at age five when he starts kindergarten. Thirteen years later, normally, the same student shakes his principal’s hand as his name is read for all to hear. (It’s really fourteen years, for the official count, since we always start in the fall of one calendar year and end in the spring of the next).

It seems that we have been aiming for this week since August. We had to take the official senior photos, and get them sent in for the year book.

Our first senior night came at the end of football season. Many of the boys came out of their pre-game huddle and pep talk pretty emotional; the men in my life insist this particular game requires a devotion and a strength of teamwork that is not equaled in other sports. In any case, I stood on the field with my husband and son, dwarfed by the football padding and their sheer size…. and overwhelmed by the way the players wore their hearts on their sleeves that last time they came out on the field together.

Determined to keep my own tears at bay, I joked with another mom about how I really did not want to spend my son’s entire senior year thinking about his “last” this and the “final time” he would do that. Right there on that football field, we smiled at each other, and we put on our game faces. We agreed that we would enjoy the year–just like they would. “Besides,” I said to my friend, “I hate to cry. It makes it hard to breathe.” We would

“Hurt during her final soccer season, but she still got out on crutches to kick that ball one more time!” noted one touching video.

“It’s his last time in the musical!” said one.

“Final time on the basketball court–what a great ride!” enthused another.

“Concert tonight will be great–I’ve so enjoyed watching these for the past eight years!” stated another.

“Special friends at their final lacrosse game,” posted yet one more mom friend. “Some of the best years of my life have been spent with these friends, watching our boys play.”

During their final day of school, special photos started showing up in my newsfeed, all snapped by their diligent parents. They showed comparisons of their soon-to-graduate son’s and daughter’s first day of kindergarten–and their last day of their senior year. (And yes, yet another mother-of-the-year disqualification alert: I didn’t even think to take a “final last day” photo.)

For the most part, my friends and I have weathered the “lasts”and the “final times”, and we just enjoyed the special moments, locking away memories to pull out and replay later on. May and June brought all of this to a fevered pitch, with an eagle scout award ceremony for a special family friend, and numerous award banquets for so many kids we’ve watched grow up.

And suddenly, it’s here. Graduation week is starting, and it’s Sunday, with their baccalaureate. I let my son drive us to the ceremony together, me in the passenger seat feeling the wind blow through my hair and not worrying about how he drove, or if cars were coming, just trusting him to bring us there safely.

As we get out and start to walk into the school, for just a moment, I compare where we started, and where we are now. My muscle memory still recalls how he slept cradled in my arms… how he reached up to grab my hand when he was unsure or just wanted to toddle along beside me… how his steps soon matched and then surpassed my own stride as he grew ever taller… how he suddenly looked down on me and rested his elbow on my shoulder… how it delights him now, to pick me up the way I used to swoop him up as a baby…

We take our seats. Graduation week has started.

Subscribe
← Previous: Monday: Finishing the Seasons Next: The Independence Parade →