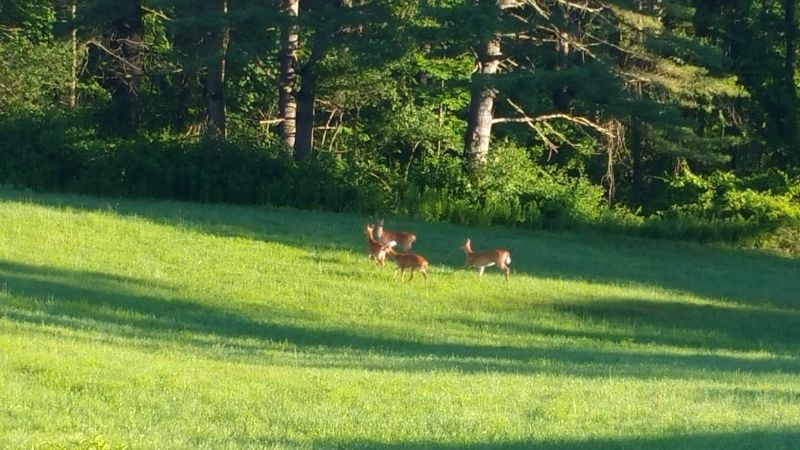 At the end of the day, sometimes my husband and I like to go for a drive to look for wildlife.  We usually see at least one deer.  The most hoped for—and elusive—animal is a bear, though.  All of us in our neighborhood see them just often enough to know we should keep an eye out.

Our niece eagerly agreed to the outing.  She settled into the backseat happily, chattering to the dogs.  The dogs love nothing more than a ride.  One accompanied her in the adjourning middle row seat.  The other stretched out across the back row.

We drove up our road, looking hard at the old muster field.  Most nights, a doe and this spring’s fawn are out grazing.  We saw nothing of deer, but our niece appreciated the sheep at the farm on the way up.

After a few miles, we turned left at Cow Path 40 (and yes, that’s the true name of the road).  Around this spot, at different times, I’ve seen moose, bear, deer and a fox.  Again, there were no animals to be found.

Although Vermont is known for its spectacular mountain vistas, on some backroads (like the one we were on), it’s basically a long, green tunnel of trees with an occasional view.  Our companion kept up a steady conversation, with us and with the dogs.  I pointed out the views to her whenever they opened up.  Without exception, she proclaimed “That’s a GREAT VIEW” at each and every one, no matter how quickly they disappeared or what they encompassed.

By the end of our little trip, we had seen no animals at all.  I found this disappointing.

But not my niece.  She climbed out with the same bubbling level of enthusiasm she had shown for the whole drive.  “That was FANTASTIC!” Another silver lining:  seeing a well-traveled path through an eight year-old’s eyes.