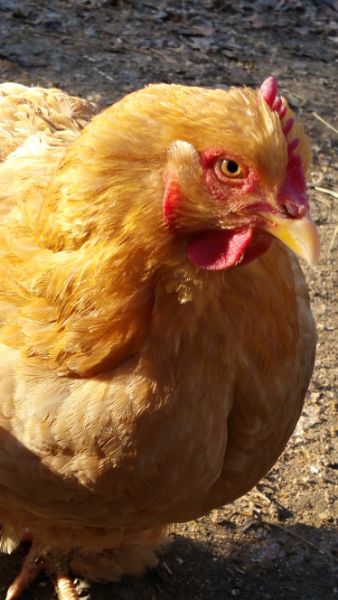 Who knew that chickens would figure so prominently in our weeklong, mandated quarantine?

After Tuesday’s catastrophe with two hawks taking a chicken—and then ripping into it while standing in front of the door of the chicken coop, where all the others had to stand as witness in terror, we have been cautious with letting them back out again.  We’ve had chickens for about fifteen years.  In all that time, the hawks have also lived in the area.  Why are they suddenly taking our hens now?

Would they move on after the first?  Or would they—as I feared—think they had just found their next forty or so meals?

We left them in on Wednesday.  The weather has turned this week, and the bright sun has power.  The ladies are not happy being stuck inside their home.  It is not like the days of sub-freezing temperatures or heavy snowfall.  On those mornings, when I open their door, they rush outside with great enthusiasm—only to turn around in seconds.  Chickens do not like wet feet and they don’t wish to be too cold, either.

But this week brings hope and dripping icicles, and the chickens made it clear they would prefer to be out.  Since we were down with them, shoveling and cleaning away, we let them go out for a few hours in the afternoon.

Today, I gave them freedom for the day.  They immediately headed out, some staying close to the coop, others heading under the rabbit pens and a few bold souls stomping on top of the snowbanks.  They were happy ladies, and I tried to shake off my worries.  Surely I didn’t have to keep them locked up for too long?

I kept an eye out on them today.  I can’t see them from my office window at this time of year; they tend to stay down on the lower part of the yard too much.  But I had my window most of the day, too, and I kept an ear out.

Around 3 PM, I heard that same sound as Tuesday: the frantic squawking and hysterical noise making, their only way to cry for help.  I raced down the driveway, screaming at the hawk as soon as I saw him (or her).  He was on top of one of my white hens, again ripping into her with glee.  The rest of the flock had taken shelter inside the coop, a refuge that actually offered them no protection at all.

I scared the hawk.  He was not expecting a crazed human to attack him verbally.  He actually rolled back onto his back, cowering in a corner of the run.  He could have righted himself and walked towards me—indeed, he could have even attacked me easily.  Instead, he sat with his beak open, his eyes huge and luminous, staring at me as if in shock.

We use a large, long piece of wood to brace the door each night, and it was by my right hand.  I kept yelling at the hawk, telling him that he could NOT kill chickens, that I would have to kill HIM, and that I didn’t want to kill him.  I thought about using the stick—he was not moving, and I could have done it.

Except that I can’t kill an animal like that.  I know that he must eat, and that this is his world.   Instead, I just kept repeating to him—loudly–that he could NOT come back, that he may NOT have my hens, and that he MUST leave.

After another thirty seconds or so, he scrambled forward and tripped his way into flight.  For as many times as I’ve observed hawks in flight and thought them graceful and majestic, this bird looked for all the world like some gangly teenager thug, trying to run away after being caught red-handed in something he knew he should not be doing.  When he landed in a tree not fifty feet away, and looked down smugly, knowing that his moment of near-death had passed, he only strengthened his bad reputation in my mind.

He left one dead hen in his wake, and I carefully moved her body aside as I closed the door to the coop itself.  Then, followed them in.

Tuesday, the hawks had claimed two chickens.  One, a Sussex, was their prey, like today.

But to me, the greatest tragedy of that first hawk attack had been the death of my favorite bantam chicken, a little one I called Gail.  Gail was special.  She greeted me each morning and had the sweetest way of talking constantly to me as I tended to their water, food and bedding each morning.  She even enjoyed being carried around sometimes.  She might have been small in stature, but her personality was unmatched.

But on Tuesday, I had found Gail smashed back into the back of the nesting boxes.  She was apparently suffocated by the other hens as they smashed themselves into the spot that seemed safest to them.  She outwitted the hawks.  But she died anyway.

Today, I carefully pulled each individual hen out of each of the four nesting boxes.  Again, in one, they had buried themselves about six deep.  But today, no one was crushed on the bottom.

I went up to the house, and the whole family rounded up the remaining four chickens.  These intrepid explorers seemed almost frozen in place and took some real convincing to move back down the hill to the scene of the crime.  Still, with the four of us, we made sure they were safe, too.

Tomorrow and Sunday we will see that great February mix of rain/sleet/snow and everyone’s favorite of “frozen precipitation”.  Our chickens will be OK with staying inside in that weather.  It will give us time to find some sort of netting that will allow chickens some outside time and foil the hawks’ plans.  Their survival will have to come from other wild animals; this feed source must be shut down.

Perhaps it seems odd to call the death of a chicken a silver lining.  And the death is not the silver lining; it’s sad, even if it is a “natural” thing for hawks to hunt through backyard flocks.

But because we were all home today, I think we saved the rest of them.  It’s a small win, and a small silver lining.