A Great Time for Basketball 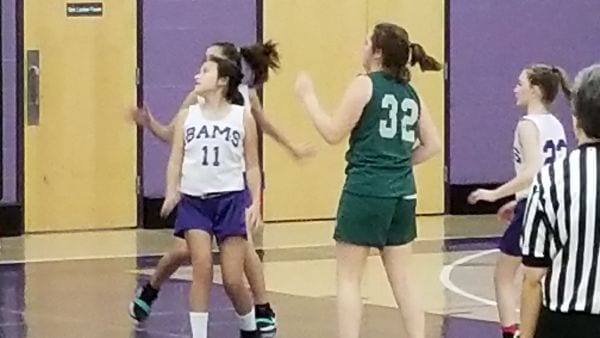 “Why do you always force me to do things I don’t want to do?” my seventh-grader complains when I tell her she will be doing basketball this fall. “Why can’t you listen to me?”

I decide not to answer that directly, feeling a twinge of remorse. She’s right. I am not purposely not listening to her. I am not taking her opinions into account, and I am making a decision for her when she is expressly telling me she does not want to do it.

Instead, I just remind her that she used to want to play basketball, but that it didn’t work into her schedule before because of skiing. I note that she has asked for a basketball hoop for three Christmases in a row. (I keep back that one will finally arrive under our tree this year.) I list off the names of her many basketball playing friends. I even recall that her brother played–and that he had a great time.

She’s right again. I almost give in, and I almost don’t push her into this.

“Besides, I don’t have any shoes for basketball. You would have to buy new shoes.”

She continues to complain. “But I don’t get why I have to play anyway? Why? Why can’t I decide? Why are you deciding for me?”

This gets to me, although I will not show that bit of doubt in any way to her. Instead, I ask her what she did yesterday? And the day before? And all the other days of this vacation week? Where has she spent her time? What has she done? What interaction has she had with the world? Indeed, has she even come out of her room earlier than 1 or 2 in the afternoon?

She glares at me. Apparently 12 year-olds are really, really good at conveying meaning without using words. She doesn’t like this part of the conversation. She, like a whole lot of other kids her age (and a bit older and perhaps some younger ones, too), she is perfectly, completely and totally content to spend time in front of a screen.

Sorry, let me rephrase that.

She is perfectly, completely and totally content to spend ALL of her time in front of screen.

Again, she is not alone. Her brothers are only moderately better. Or, maybe they are no better, they just get hungrier faster, and show up in the kitchen to scrounge for food earlier in the day.

When I finally give up and throw a fit–and take away the cell phone, what happens?

I find kids in front of their computers, doing the same things that they did on the cell phone–but on a larger screen.

If I take away the computer? I will usually find the offender in front of yet a larger screen–the television.

Eventually, as parents, we reach a point of no return, a boiling over that explodes onto them in a diatribe against slothful tendencies and lack of ambition, a condemnation of video games, a lack of human interaction and a voiced concern about their abilities to interact with the real world. Heck, if I am on a really good roll, I might even throw in something about their not being able to ever hold a job or be a part of society as they get older–if all they want to do is hole up in a basement or a bedroom and interact virtually.

These are likely not my finest parenting moments.

And yet, I know I am not alone as a parent trying to find that line of their wish for “down time” and my desire to see them “being productive”. (Admittedly, part of my conflict comes because as they sit in front of their screens, chores go undone, and that creates more work for me. “Down time” is much more plentiful in their world than mine.)

So, when our daughter insists that she “doesn’t spend that much time in front of screens” (and oh, she does, she really does!), I turn a deaf ear.

Am I the meanest mother in the world for not listening to her (clearly and vehemently) expressed wishes?

Or is it part of the role of a parent to help find balance–and build healthy friendships and habits–even if it means not listening to your child? No doubt many have opinions on this age-old question.

In any case, basketball practices have led to games. I insist that everyone comes–the brother home from college (who brings along his girlfriend), the junior in high school (and yes, he can bring his girlfriend, too), the Spanish sister and the Brazilian brother. Eight people come just for her, cheering loudly in support of any and all of her efforts.

She and her friends play a good game, and the team wins.

And, she is no longer complaining about “having to play basketball”. Now, when she wants to sit in front of a screen for a while–after school, practice, homework, family supper and chores– I quickly agree.

All in all, I still think it’s a good time for basketball.

Subscribe
← Previous: Air Traffic Control (or Getting Home) Next: The Brazilian Weatherman →